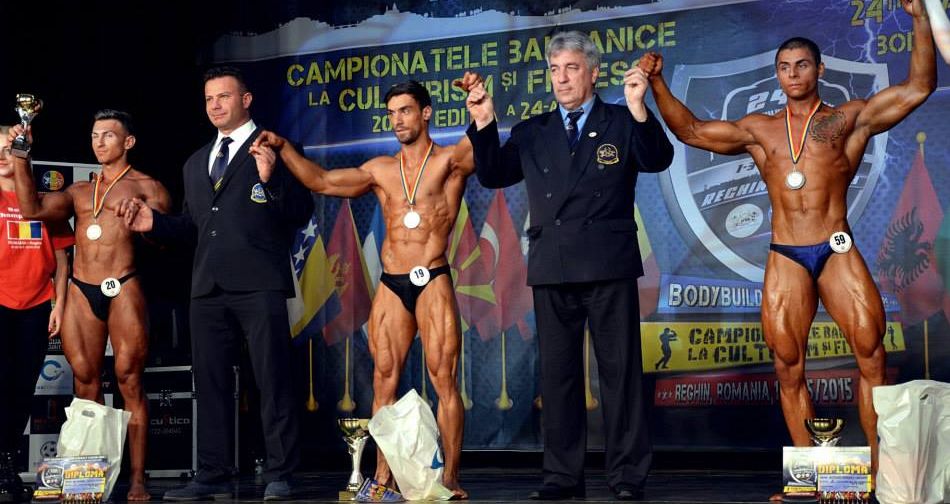 ROMANIA WAS AN OUTSTANDING HOST

In the beautiful Romanian city of Reghin, a city of violins, the 24th Balkan Championship in Bodybuilding and Fitness was held.
The organizer of this important contest in the IFBB calendar was Romania’s National Federation of Bodybuilding and Fitness, led by its extraordinary President Gabriel Toncean, and his team, which was comprised of Ovidiu Mezdrea, Marius Portik and Monica Nicolaescu.
Before talking about the competition, I must point out phenomenal organization of the championship.  Mr. Toncean has invested enormous resources and time to maximally cover this competition in media, to provide outstanding accommodation, food, attention and kindness for all participants. Mr. Toncean proved to be a great host, extremely capable organizer and in every respect a great young man and a businessman, with the behavior and manners for example. The same can be said for all of his colleagues from the Romanian National Federation. Their warmth and hospitality will remain in unforgettable memory of all participants at this successful competition.
112 competitors, from five countries, (Bulgaria, Bosnia and Herzegovina, F.Y.R Macedonia, Serbia and Romania), fought in Reghin for medals in 21 categories.
Although, this year Croatia, Slovenia, Greece and Montenegro did not participate, the number of competitors was only for 23 fewer than last year, when record number of participants was realized in Zajecar, Serbia.
Despite the smaller number of participants, the quality of the competitors, in almost all categories, was high.
Program of the competition was divided into two parts, morning and afternoon session. In the morning part, in front of the packed auditorium, juniors in the bodybuilding category went out first.

In the category of up to 75 kg Paul Rusz from Romania triumphed, and in the category over 75 kg the winner was Valeri Enchev from Bulgaria. Enchev, was declared as overall winner with a unanimous decision.

In the Women’s Fitness category close fight was between two Romanian girls, Laura Cupsa and Florina Cernat. With only a one point difference Laura Cupsa was declared the winner.
In the Women’s Physique category judges did not have a difficult job, because the competitor from Bulgaria, Todorka Ivanova dominated the second-placed Romania’s Florina Rusu.

In the Men’s Phisique, up to 178 cm, ten exceptionally ready athletes appeared on the stage. Its dominance in this category Bulgaria confirmed by winning two first places. Gold medal went to Martin Truhchev, and silver to Valentin Petkov.
Best in category Men’s Phisique over 178 cm was Srboslav Lazic from Serbia, and next to him on the podium stood Dan Onigoaie from Romania, and Todor Dimitrov from Bulgaria.
Overall winner title in the Men’s Phisique went to the Bulgarian, Martin Truhchev.
Only three athletes, and all of them from Romania, competed in Men’s Fitness category. The best impression on the judges, with his program, left Razvan Sindelaru.
Experienced veteran, and multiple champion of the Balkans, Jovce Vasilevski, from Macedonia, came to Reghin to regain his title, after the failure at last year’s championship in Zajecar. This time, he appeared very well prepared, and the judges had no doubt to award him with first place. Behind him were placed the excellent Sorin Fritea from Romania, and Pavel Lubenov from Bulgaria.
The winner of the Men’s classic bodybuilding up to 175 cm category, Cristian Berciu from Romania, led a fierce fight with the winners in the categories up to 180 cm and over 180 cm, Gluhkin Ivelin and Emanuel Ciril Iudzi, both from Bulgaria. For the overall winner Emanuel Ciril Iudzi was unanimously declared.
After the official opening ceremony, and handing out awards to the Mayor of the City of Reghin, Mrs. Maria Precup, Mr. Gabriel Tonceanu, Ovidiu Mezdrei and other members of the organizing committee who, in the name of the IFBB President, dr. Rafael Santonja, were presented by the Balkan Federation President, Nenad Vuckovic, afternoon part of the contest started with the Women’s Body Fitness category.
Last year winner, Marija Veresbaranji from Serbia, confirmed her title surpassing the excellent competitors, Florina Janco from Romania, and Kristina Danilovic from Serbia, who had to settle with a silver and bronze medal.
Junior Women Bikini Fitness category was dominated by contestants from Romania. The absolute winner was selected between Romanian girls, Andra Moscu and Oana Diana Beatrix. The cup for the absolute winner was awarded to Oana Diana Beatrix.
16 beautiful girls competed in two Women Bikini Fitness categories, up to 163 cm, and over 163 cm.
Exceptionally prepared and attractive competitor from Macedonia, Marija Naceva, has managed to triumph in front of experienced and beautiful Maja Pavlovic from Serbia

In the category over 163 cm, judges give advantage to the girl from Bulgaria, Daniela Kurteva, over excellent contestants from Serbia, Milica Lazovic. The title of the absolute winner deservedly went to Marija Naceva, from Macedonia.
The unexpectedly, but deserved, Men’s Bodybuilding was dominated by competitors from Serbia. Serbian bodybuilders have won three out of five categories in Men’s bodybuilding. In up to 70 kg, the winner was Bojan Berle, in up to 80 kg, Nikola Milanovic, and in up to 100 kg, Milan Savic. In the categories up to 90 kg and over 100 kg, the winners were Kirjakov Georgi, from Bulgaria, and Zi-Makanda-Alain N’Giuvu, from Romania.

After an exciting   and exhausting comparative posing, absolute winner was declared. It is for this year, the best among the best in the Balkans, harmonious and maximally prepared Milan Savic of Serbia.
Finally, once again, I want to emphasize the excellent organization of this championship, and exceptional hospitality, that the organizers and the citizens of Reghin showed at every step and in every aspect to all participants of the Balkan Championships. THANK YOU REGHIN! THANK YOU MR. TONCEAN!