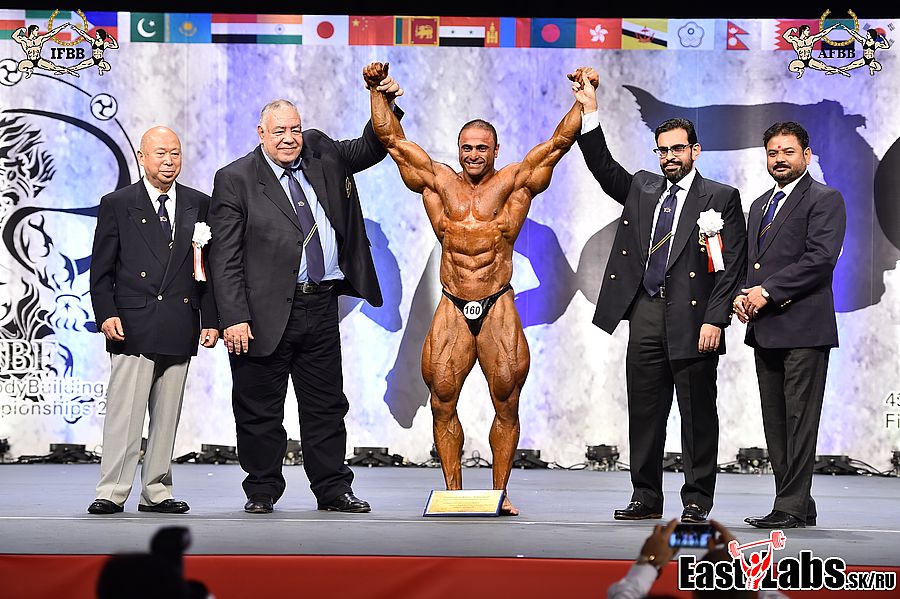 Sunday, June 7th, 2015, was the day of the finals at the 2015 Asian Bodybuilding and Fitness Championships. Medals were distributed in all categories and overall winners were declared. Only two last year’s champions won the gold medals once again, but in the other categories: Yi-Ming Li (Chinese Taipei) won the Women’s Physique short class (last year won the up to 49 kg category) and Abdullah Al-Jabri (Oman) won bodybuilding up to 70 kg class (last year was the champion in junior bodybuilding up to 70 kg category). Zulfiya Bitiyeva (Kazakhstan) regained the title in Women’s Bodyfitnesspreviously won in 2011.

Some of the last year’s champions have been dethroned but kept the high runner-up’s positions: Satoko Yamanouchi (Japan) in Women’s Physique, Takachiro Mizoguchi (Japan) lost the title in Bodybuilding up to 55 kg class but placed high, at the 2nd position, just behind the new champion, Ayoob Alammar (UAE), whose latest start at the IFBB Asian Championships took place in 2008 (bronze medal).

The next star from Oman and last year’s runner-up in 75 kg class, Faisal Al-Mataani, won his next silver medal, losing to a new star from Iran, Farhad Rokni, who got perfect scores. 2013 World Champion Sajad Niknam Pour (Iran) confirmed his top quality and won his first IFBB Asian title.

Ahmed Al-Maskari (Oman) returned to the Asian Championships after his 5th place in 2012 and won the silver medal in 85 kg class, behind a new, sensational star from Syria, Zouhair Wanous.

90 kg category was dominated by new Iranian stars: Yasin Amani Poor and Hamid Lakaei who took the top two positions. Iranian bodybuilders repeated a double win in the next category, up to 95 kg, with Jafar Nezhad in the 1st place and Ayat Bagheri just behind him. A series of gold medals for Iran was continued in the 100 kg class, where Pouria Payoun grasped the title and it was not the end while Iranian bodybuilders took the top two places also in the super heavyweight category: Ali Kaboli Pasandi ahead of Mohsen Samadi, so 6 gold medals in Men’s Bodybuilding went to Iran! Also top two places in the overall: Jafar Nezhad ahead of Pouria Payoun. Nezhad is the third consecutive Asian Championships bodybuilding overall winner from Iran, after Khalil Asadi (2014) and Hadi Choopan (2013).

Anyway, the best team title went to Japan, having a lot of top places in women’s divisions, while Iran can’t enter any woman. Iran took the 2nd position, ahead of Korea, China, Bahrain, United Arab Emirates and Kazakhstan.