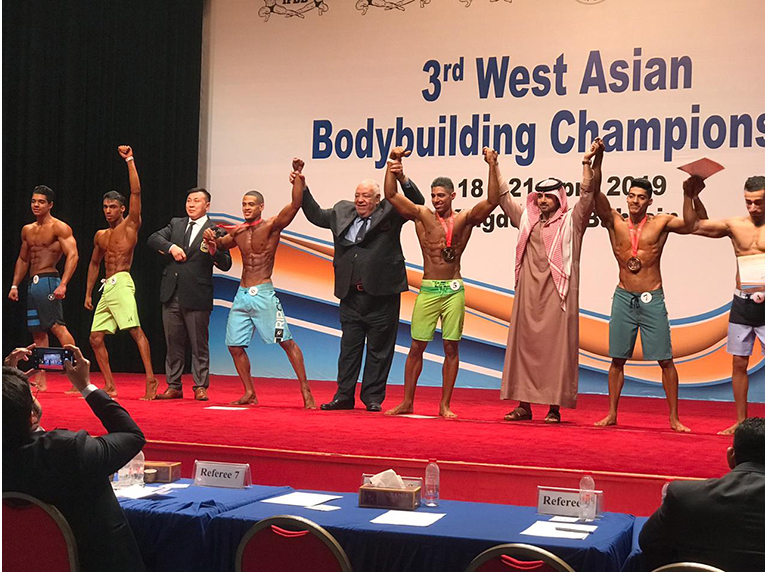 In another challenging weekend for IFBB athletes worldwide, an important part of the action has been in Manama, in theKingdom of Bahrain, with the 3rd. edition of the West Asian Bodybuilding Championships, where hundreds of competitors from the Persian Gulf area and Western countries have been competing, from 18th to 21st. April.

Organized by the Bahrain Weightlifting Federation (BWF) headed by Colonel Sultan Husain Al Ghanem and recognized by the Bahraini Olympic Committee; the Championships were celebrated at Bahrain University’s “Shaikh Abdulaziz Hall in Sakhir”; in coordination with the Asian Bodybuilding & Fitness Federation (AFBF).

The competition has been another step forward in the development of Bodybuilding in Bahrain, where our sport is really popular and their athletes won a total of 20 medals (9 gold, 4 silver, and 7 bronze). The gold medal winners wereMunther Abdulaziz, Mohammed Fuad, Hussain Ali, Hisham Ismael, Ali Hassan, Abdulwahed Al Asfoor, Sayed Hadi Hashim, Ali Al Qassab and Abdulla Adel.

Just to mention some details, Abdulaziz claimed the gold in the classic 168cm category and led a clean sweep for Bahrain as compatriot Abbas Makki won silver and Abdulaziz Saif bronze.

Fuad beat Syrian Ali Karmo for the gold in the classic 175cm category, while fellowman Hussain Abbas settled for the bronze. Ali won the title in the Master Bodybuilding for age 40 years old and 80kg, beating Mahmood Al Shoghri of Syria. Bader Monakhel of Syria won the bronze.

Ismael and Nader Malallah clinched a 1-2 finish for Bahrain in the Master Bodybuilding for age 40 and above 80kg. Hussain Ala’a of Iraq won the bronze.

In the Masters for age 45 years old and 80kg, Hassan won the gold, followed by Ahmed Al Belooshi of the UAE who came second and Majeed Abdulhussain of Bahrain who settled for the bronze.

In the Master Bodybuilding for age 45 and above 80kg, Al Asfoor won the gold, followed by Aref Sharaf of Yemen who took the silver.

Hashim also shone brightest in the bodybuilding for weight 65kg category, while Abdulhamid Obaid of the UAE and Mosheen Majeed of Bahrain finished second and third, respectively.

The UAE’s Ayoob Al Ammar won first place in the bodybuilding for weight 60kg category, followed by Abbas Maki of Bahrain who won the silver, while Sami Al Gharbi of Oman won the bronze.

In Classic Bodybuilding 180cm category, Suhail Ali of the UAE took the gold, followed by Mubarak Jassim of Bahrain who won the silver, and Maytham Ali of Saudi Arabia bagged the bronze. Khalifa Ali of the UAE reigned supreme in the classic bodybuilding over 180cm, with Abdulla Mubarak, also of the UAE, finishing second.