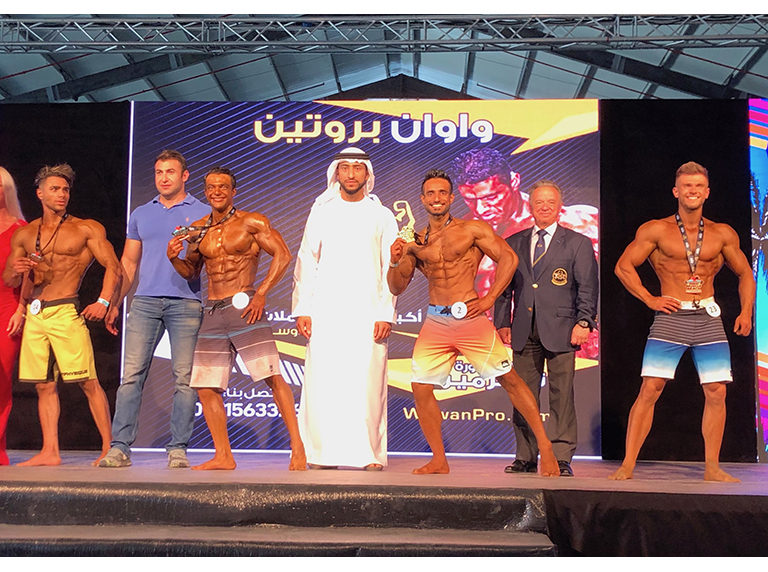 In the new city “that never sleeps”, the 2019 edition of IFBB Dubai Muscle Beach gathered athletes from more than 20 countries, boosting the great level of the Persian Gulf athletes in male categories, recent weekend 28th to 30th March.

Organized by Universal Muscle Fitness Fashion company led by young and dynamic promoter Bassem El Jawhari, with the support of the Bodybuilding & Powerlifting Federation from United Arab Emirates chaired by His Royal Highness, Sheikh Abdullah bin Hamad Al Sharqi; the 2019 IFBB Dubai Muscle Beach celebrated at the Michael Johnson Performance Center -in front of the Sea Port- has been a real success with more than 15 hours of competition where new stars have been discovered and 13 new athletes won the Elite Pro Card; most of them presented by IFBB President, Dr. Rafael Santonja.

With some categories reaching more than 20 participants, this edition has been the first appointment in the United Arab Emirates in 2019; a very special year for Bodybuilding in the Emirates, as Abu Dhabi will host, in October, a new IFBB international contest and Fujairah (November), will host the 74th edition of the IFBB World Bodybuilding Championships.